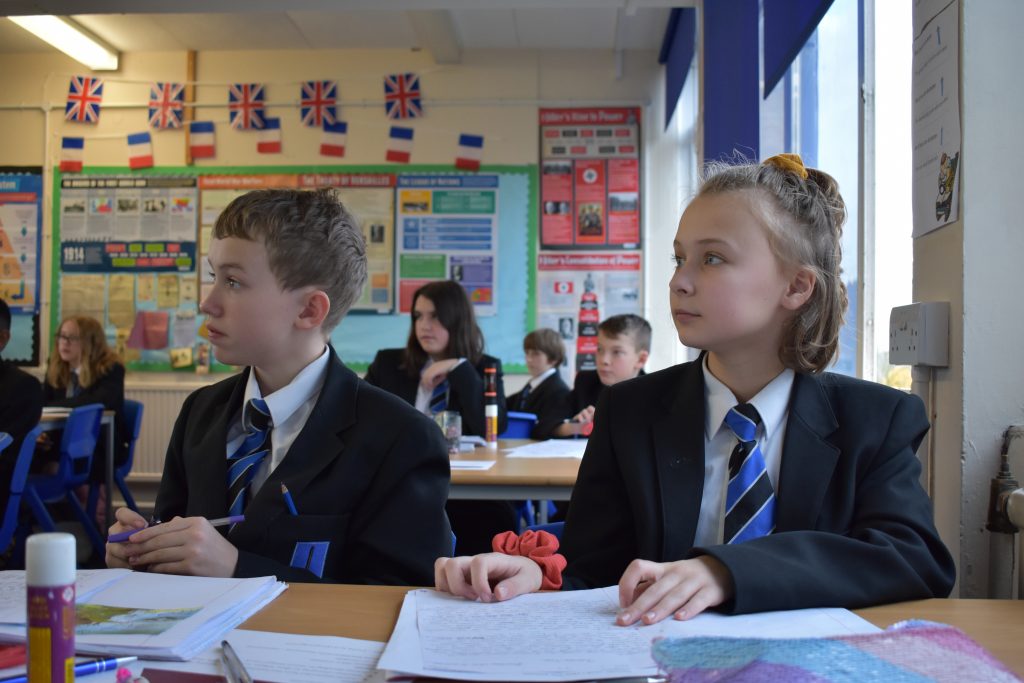 History is a compulsory element of the curriculum at Key Stage 3. At King Arthur’s School we seek to engage and inspire students through the use of a wide range of stimulating learning activities.
Students will develop their skills in understanding knowledge, explanation, investigation and handling sources and presenting arguments. These are the essential tools of the historian but also important skills transferable to other areas of the curriculum and life in general.
These skills are developed through a study of the following modules:

Introduction to the skills of the historian

Students start with an examination of the key skills used by historians, such as chronology, enquiry, using evidence and communication. These skills will then be applied to key events in the early history of Britain. Students will study:

Students then study the key features of Mediaeval Britain from the Norman Conquest to the end of the War of the Roses. Topics include:

Within this module students will complete a study in depth on the Islamic World and its impact on Europe. This will include a study of the science in the Mediaeval Islamic world, the city of Baghdad and the Crusades.

To enhance this unit students will spend a day exploring Salisbury Cathedral.

The Tudors: Renaissance and Reformation

This module will examine the impact of the Tudors on England, a time when some of the key developments in European History took place. Topics include:

The Making of the United Kingdom

This module introduces students to key events in the developments of the U.K. Topics include:

The Americas: clash of cultures

Students will then look at aspects of the history of the Americas examining how there was a clash of different cultures as new people arrived on the continent.

This module enables comparisons to be made between the arguments over the power of king and parliament and divisions over religion that were studied when looking at the making of the U.K. Topics include:

This module examines the key changes that took place due to the Industrial Revolution that changed Britain and formed the basis of modern life. Topics include:

Within this module students will complete a study in depth on the slave trade and its impact. This includes a study of the cultural heritage of slavery and its links with the development of modern music.

To enhance this unit student will visit Big Pit in Wales to experience a coal mine and its impact on a community.

The Era of the World Wars

This module involves a study of the key developments that were brought about by the two world wars. Topics include:

To enhance this unit students are offered the opportunity to visit Wold War One Battle fields in France and Belgium.

History is both an interesting and relevant subject to study. You may well ask “What use is History to me? Why do I need to know what happened in the past?” History is more than just what happened, it teaches a range of valuable, transferable skills.

Such skills are highly regarded by employers since they show that you can retain, analyse and present information effectively. In short, it shows a trained mind.

History can be an important part of your education. At GCSE it covers Politics, Sociology, Economics and an understanding of the background to current events. Choosing History will be useful throughout your time at school and in your future life.

What you will be studying

Unit 1 – Crime and Punishment in Britain from 1250-present day

This Unit looks at the changing nature of crime and punishment in Britain since the late Mediaeval period. Topics include the treatment of vagabonds, smuggling, poaching and the use of the death penalty; the impact of the Industrial Revolution on crime with the growth of cities, transportation, the development of the police force and the prison system. Case studies on changing attitudes to witchcraft, conscientious objectors and domestic violence will also be covered.

This looks at the history of Germany from the rise of Hitler to power in Germany to the end of the Second World War in 1945. Topics include the impact of the Nazis on women, youth and the Jews; the use of terror and the secret police; the impact of occupation on eastern and western Europe.

Unit 3 – History Around Us – The Stasi prison in East Berlin

This unit looks at the prison used by the secret police of communist East Germany and how historians can use the buildings to study the events and significance of the developments that took place there. Students will examine the way in which the past is presented, based on the use of physical evidence, through film and novels as well as considering the use of the site as a museum and memorial.

This unit looks at a key period of Mediaeval history and its impact on England. Topics include:

This period study looks at key developments in the USA including:

How you will learn

A variety of learning approaches will be used. These will include the development of historical skills through using evidence and information, discussion as a class and in groups, videos, computer programmes and trips where appropriate.

How you will be assessed

You will take three exams at the end of year 11. These exams will test your skills in using evidence, evaluating interpretations and presenting your own explanations.

To enhance their studies students will be offered a day trip to The Imperial War Museum to access the Holocaust exhibition. Students will also be offered the change to visit Berlin on a residential trip.

For more information or to get in touch: